I have enjoyed road trips my whole life.

Typically my family would travel by RV and camp at campgrounds and occasionally hotels.

Then later, when I started to travel in cars we either camped or stayed in hotels (or with friends)

Then I discovered “Stealth Camping” and the concept of ‘camping’ out in your vehicle for extended road trips, to keep costs down, seemed like a great idea 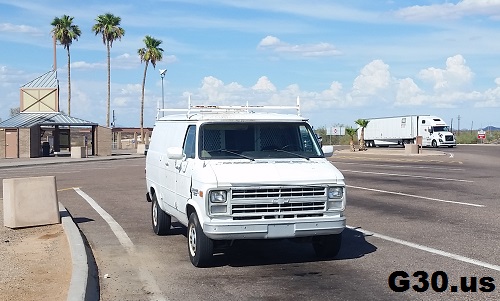 The first Van, was a 1986 Chevy G30 3/4 ton cargo (contractor) van.
It was only $500 from a Tucson School at auction.
I fixed up that van and started out on adventures in California.

The costs to repair the Engine & Transmission on the G30 amounted to almost the cost of a new van.. so the next steps were not clear..

The adventures in Van Life continues …

The title is created for these vehicles, I am told, as they leave government service, so it has a tag that is only two years old

And I have a few Official Post Office patches, and some humorus designs from friends in the #PatchGame